Sandgrouse, aside from being really beautiful birds, are a species that have become uniquely adapted to the Arid and Desert environments in which they choose to live.

Sandgrouse are a seed eating species that must drink at least once a day and will travel as far as 60 kilometers, each way, to a suitable water source from which they can drink. In addition to travelling to water sources these birds regularly fly to areas where they can collect gravel, which is then swallowed and used as “Milling stones” which the bird uses to help to crush and grind up, in their crops, the seeds that they feed on.

Recently I had the privilege of spending a couple of nights down at Ker & Downey Botswana’s Dinaka property that lies on the Northern boundary of Botswana’s huge Central Kalahari Game Reserve.

There are several waterholes that have been established and these waterholes now attract great numbers of Sandgrouse that fly in to drink every morning.

The Male birds will walk out into the water and rock back and forwards to force the water into their belly feathers. While I was down at Dinaka I was able, for the first time in my life, to get photographs of a Male bird doing this as it actually faced me – I have often filmed them feather soaking while they were standing broadside on to me.

It was only when processing the photographs afterwards that I saw just how unique the feather adaption is. It was in fact a revelation to me and I am not sure whether, up to now, this feather soaking behavior has been illustrated in this way.

I was amazed to see that the male bird can open up a “Valley” in its belly feathers and it appears that the water is forced up into this “Valley” in the feathers, which, once full is closed off trapping a good supply of liquid water behind the sealing belly feathers. This is, to my knowledge, the first time that this specific feather formation has been filmed. 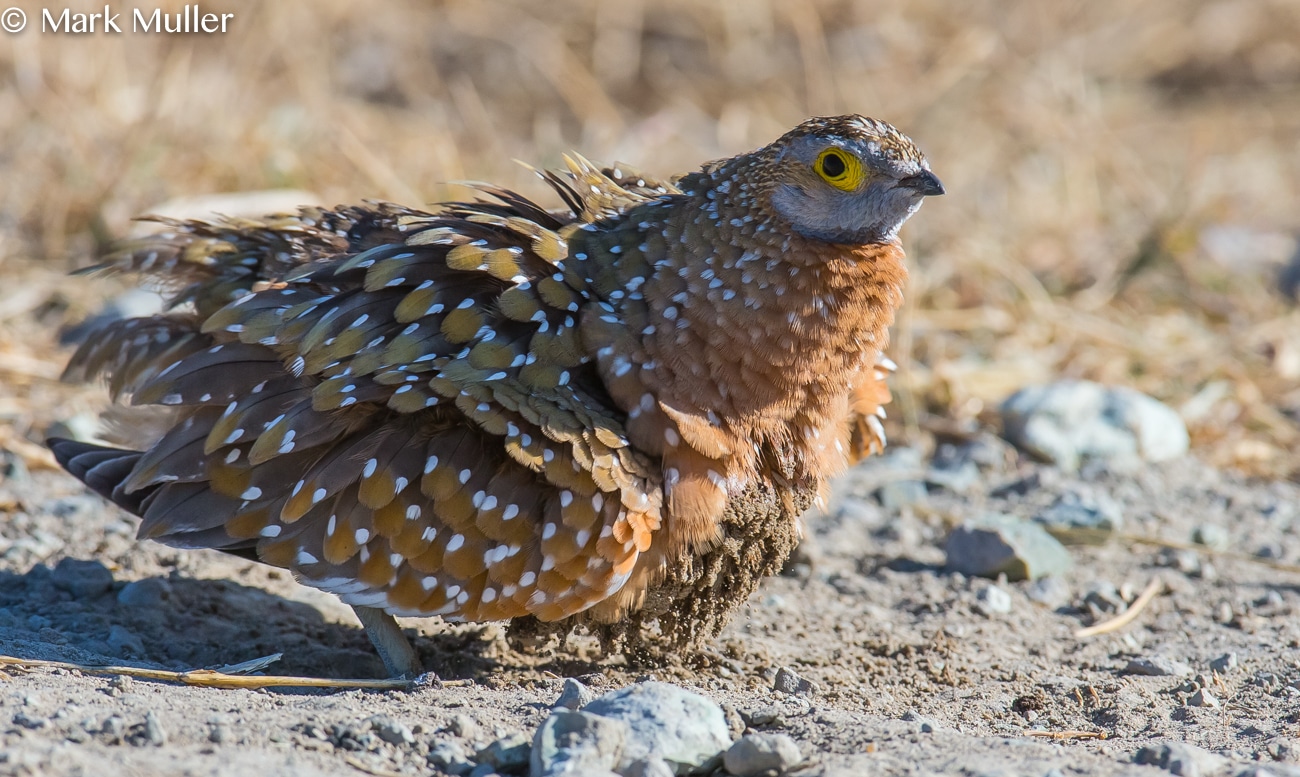 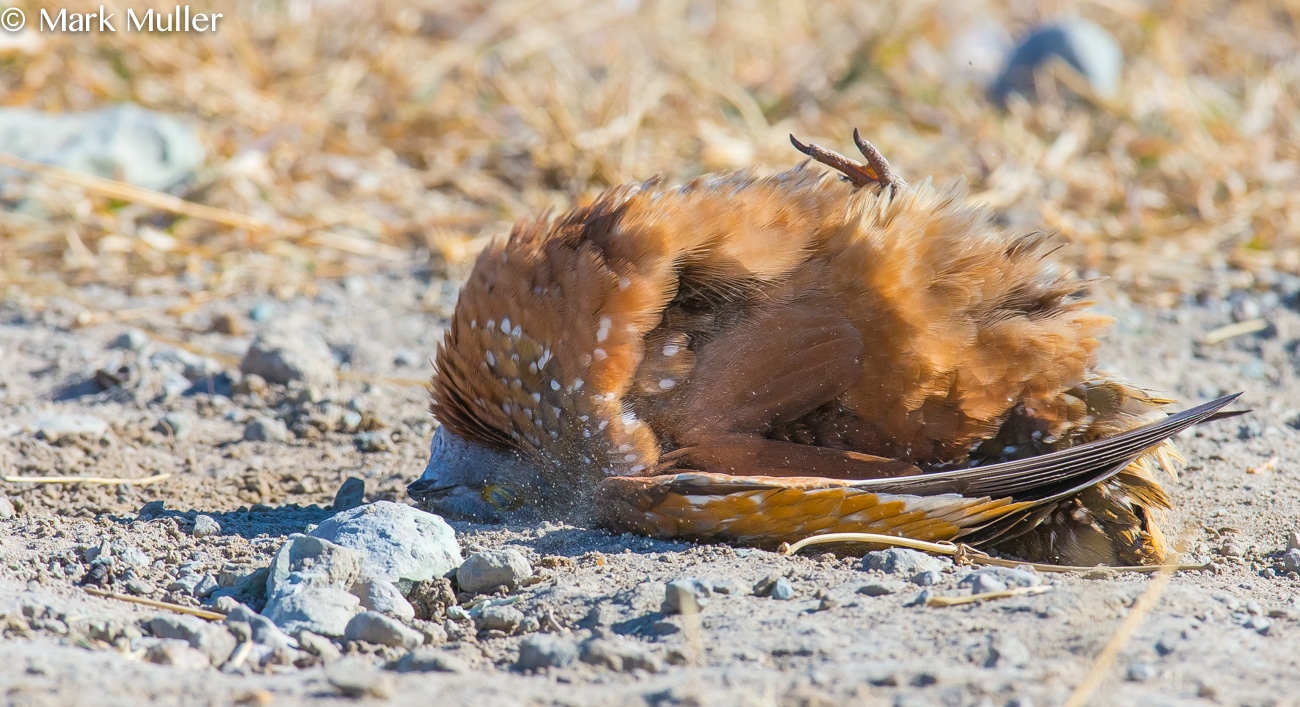 In addition to carrying water, we now believe that the Male birds will also, where necessary and after collecting water, fly to gravel pits and “Sand bathe” while their feathers are saturated. These saturated feathers then pick up the sand and small bits of gravel forming a mud like mixture, rich in gravel, that adheres to the Male birds’ belly feathers. The Male bird will then carry this “Muddy gravel” to its chicks which, in turn, pick the muddy gravel off the feathers and by so doing are able to get the gravel “Milling Stones” that they need to help them digest their seeds.

Over the last couple of months, after careful observation of these birds as they come into drink, I have noticed that a fair number of Male birds arrive with feathers that are already wet. I believe that, as the picture of three large chicks shows, when chicks are almost fully-grown but still dependent on the daily water that the Male bird brings, that male birds may have to make two trips each day to ensure that the chicks get enough water. 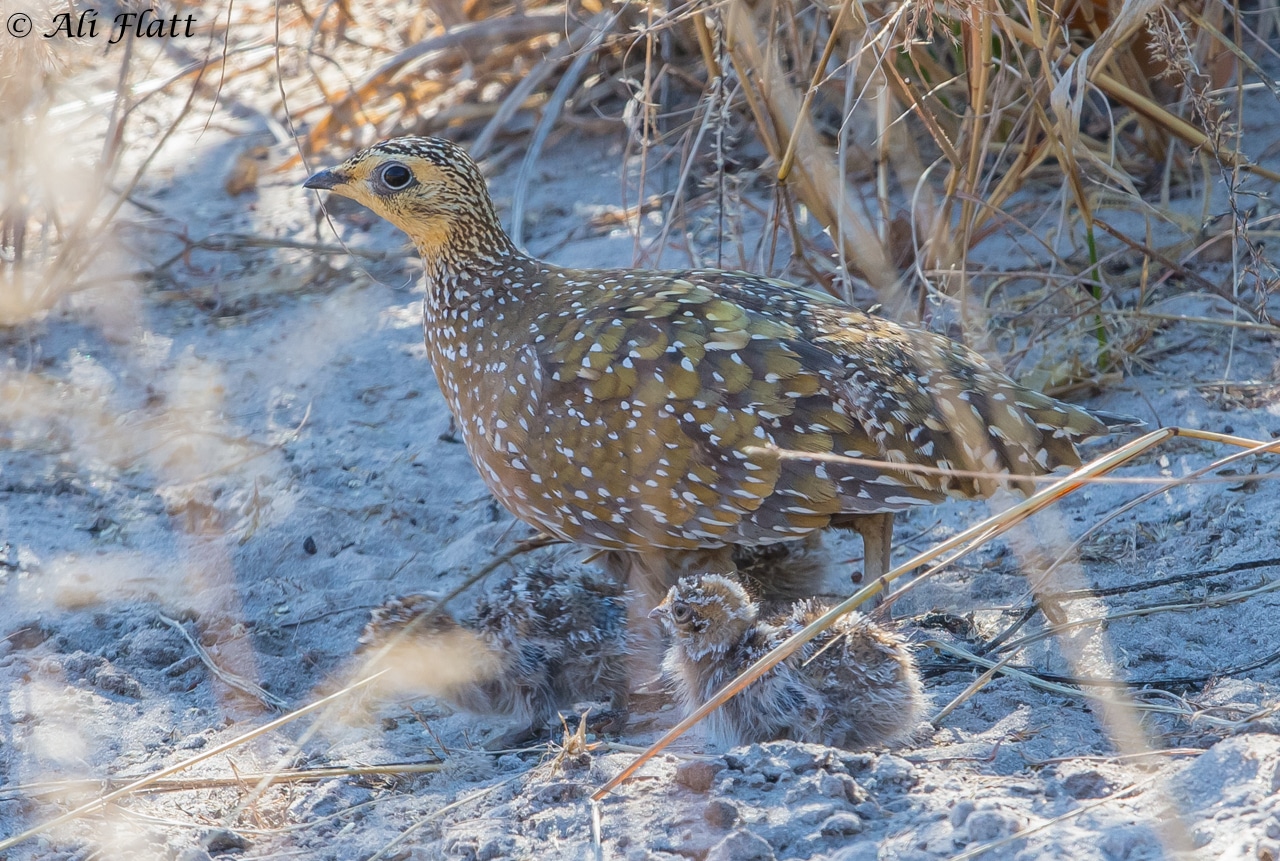 These little birds have really evolved a unique way to ensure that they survive and thrive in the hot and arid landscapes in which they choose to lead their lives.