The lions have been regular visitors into camp at Dinaka this June. The first week the two resident males were in camp every morning at dawn, having announced their imminent arrival with intermittent roaring sounding ever closer.

Mostly they stayed long enough to drink and then head off, although one morning they saw Judy on her tent deck in her pink dressing gown, and the larger lion came over to investigate. Sensibly Judy retreated inside the tent before he got too close, and he lost interest. Then a visiting male, older than the two boys and with a black mane, killed a kudu cow early one morning at rhino pan. He stayed with his kill most of the day, then, having left very little for the scavengers, took off to the west to parts unknown. He came back a few nights later, walking underneath the sleepout deck and down to drink at rhino pan. Although we did not see him we found his fresh tracks. 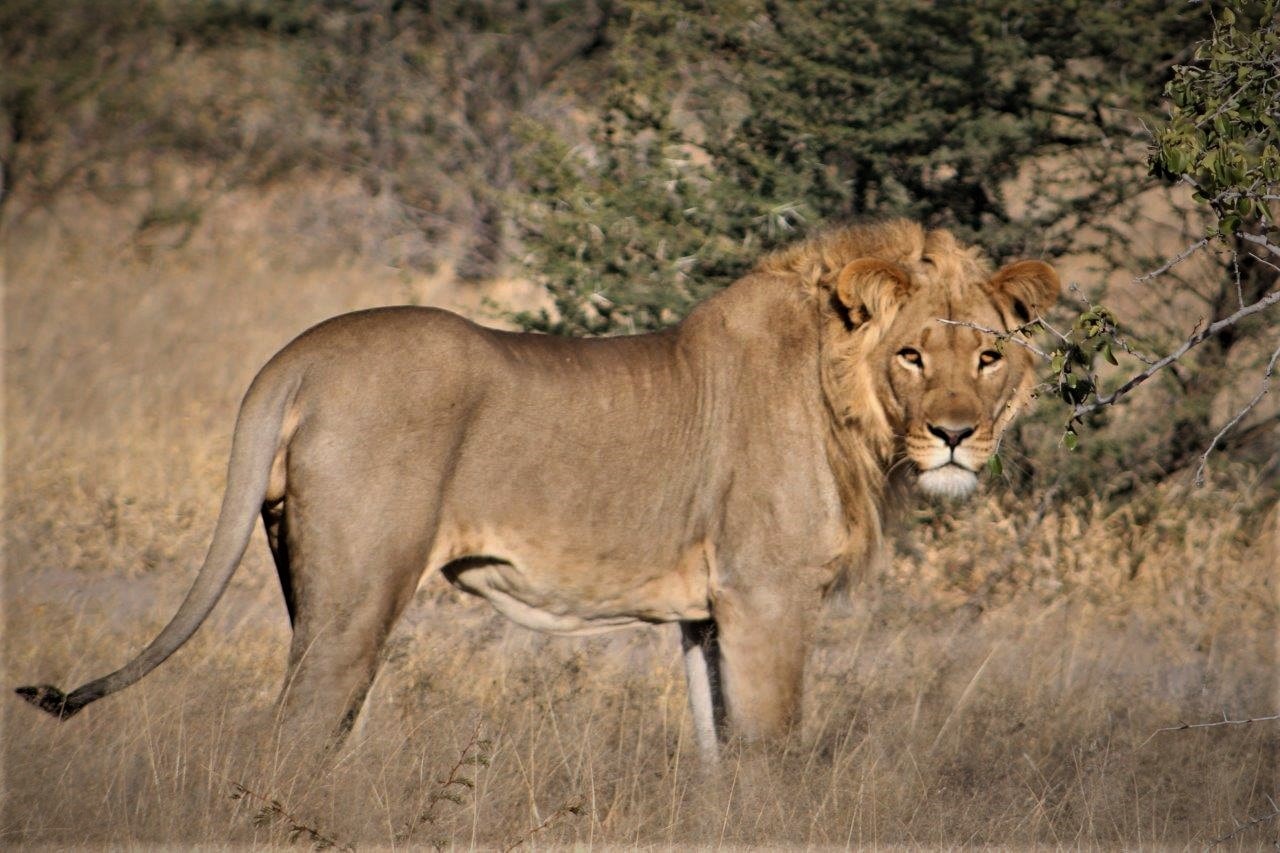 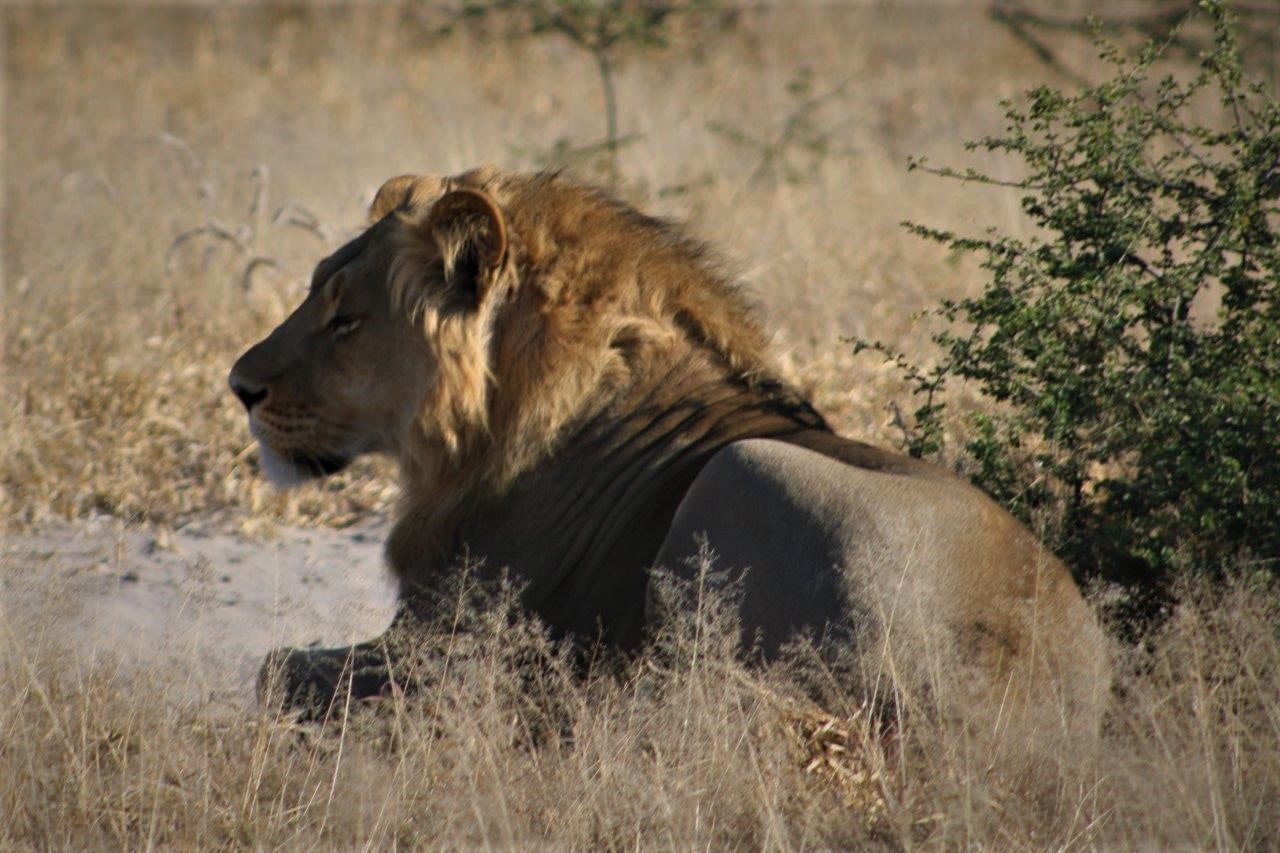 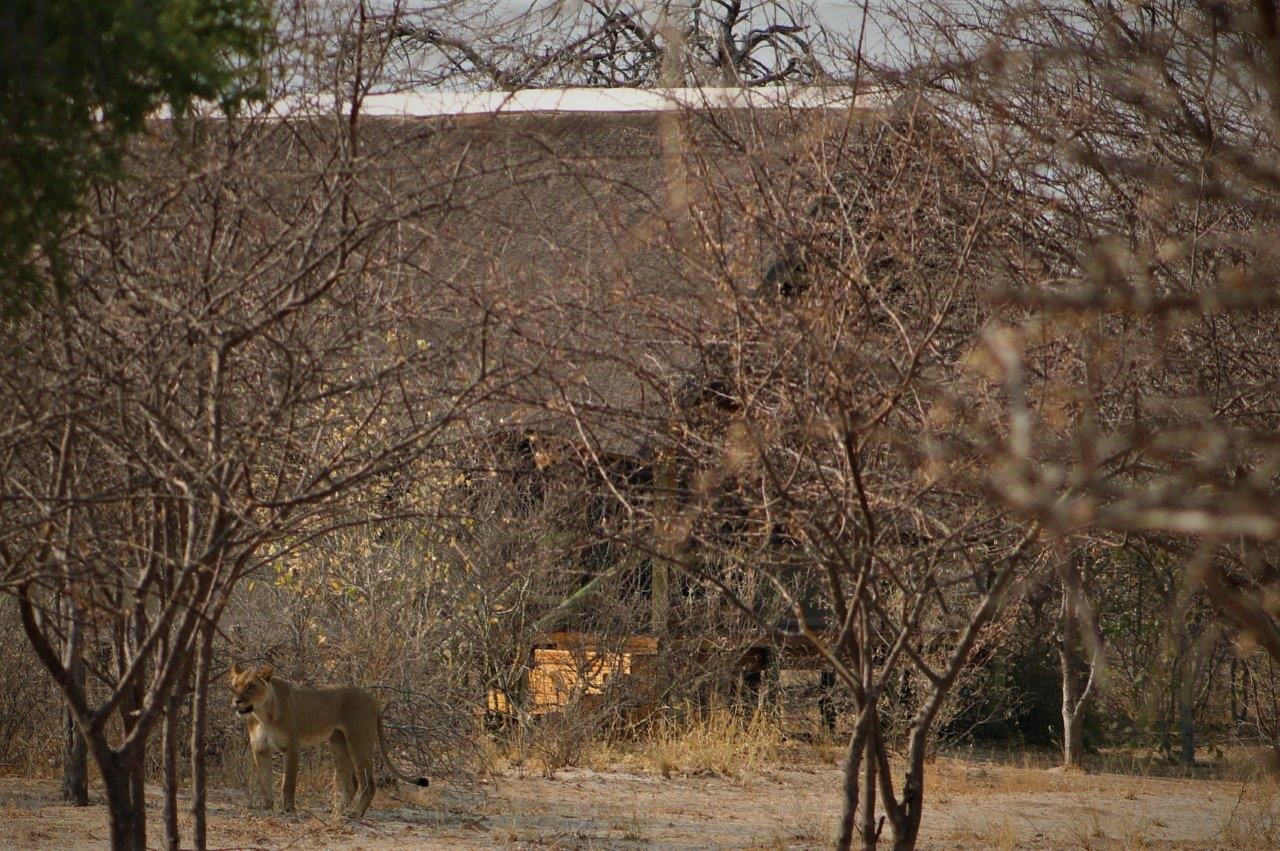 The other resident young blonde male and his lioness friend were seen mating at the underground photographic bunker by Dimpho (Conservancy team), and we found him, alone, at the hide waterhole the next day. We see their tracks on and off in the southern area.

Then for the last ten days an adult lioness has been around. We saw her first drinking at rhino pan, and have seen her tracks regularly. Then two days ago she appeared at the camp waterhole at 10.30 in the morning, drank long and deep and then marched determinedly off to the east. The consensus of us all who’ve seen her is that she is pregnant. 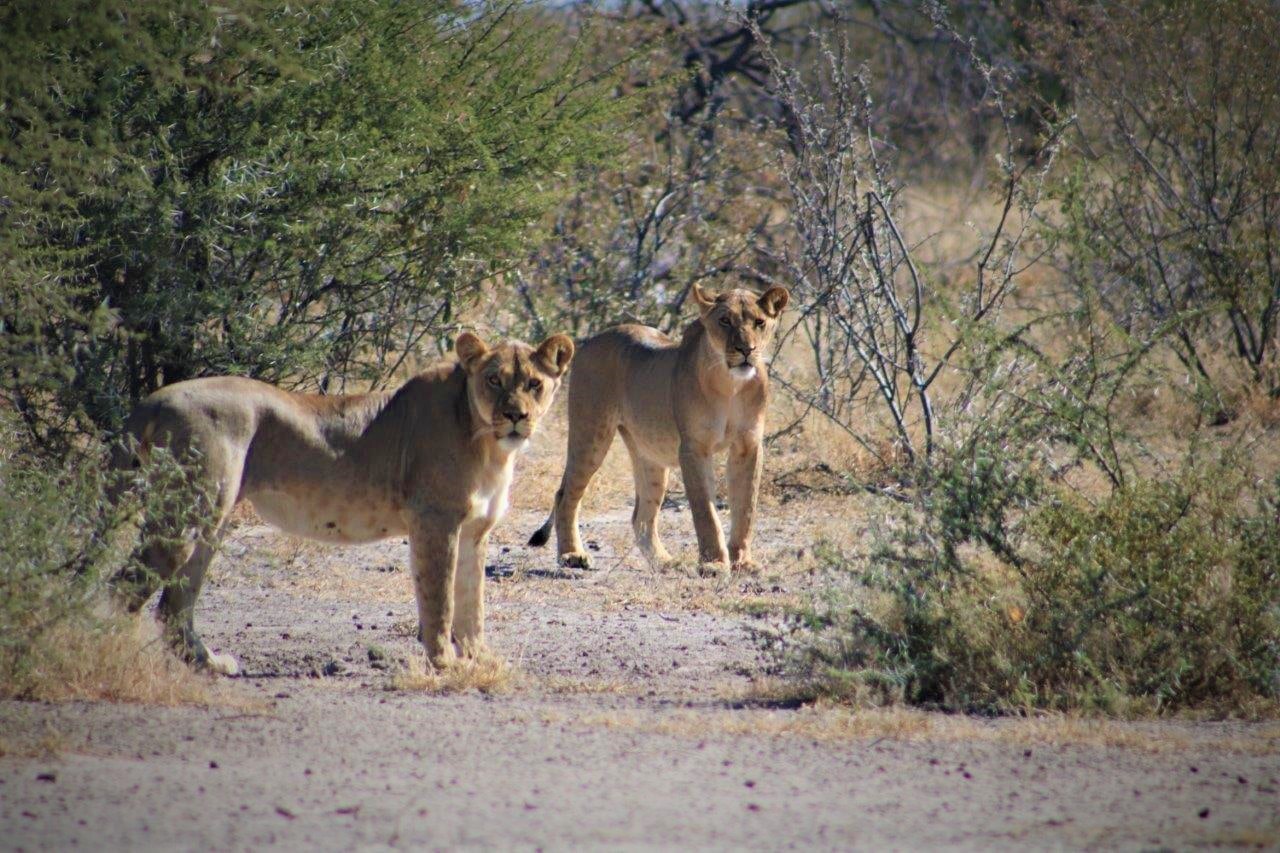 We had a great sighting of an old brown hyena at the underground photographic bunker water hole. We’d parked for a sundowner in the open behind the underground photographic bunker when he came plodding across right in front of us and waded into the the waterhole. After drinking and dare I relate defecating in the water he plodded off, raising his mane as he went to show us he was aware of us but didn’t care! 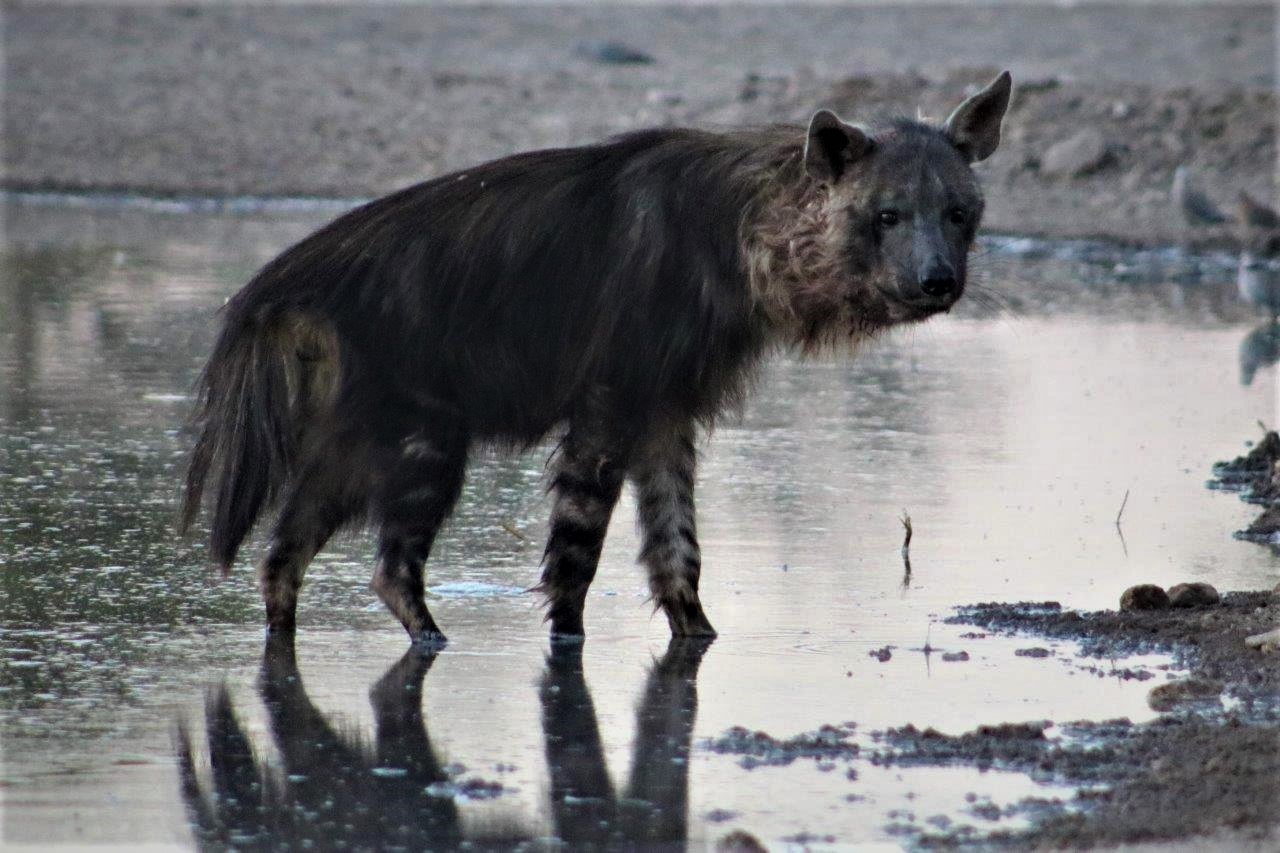 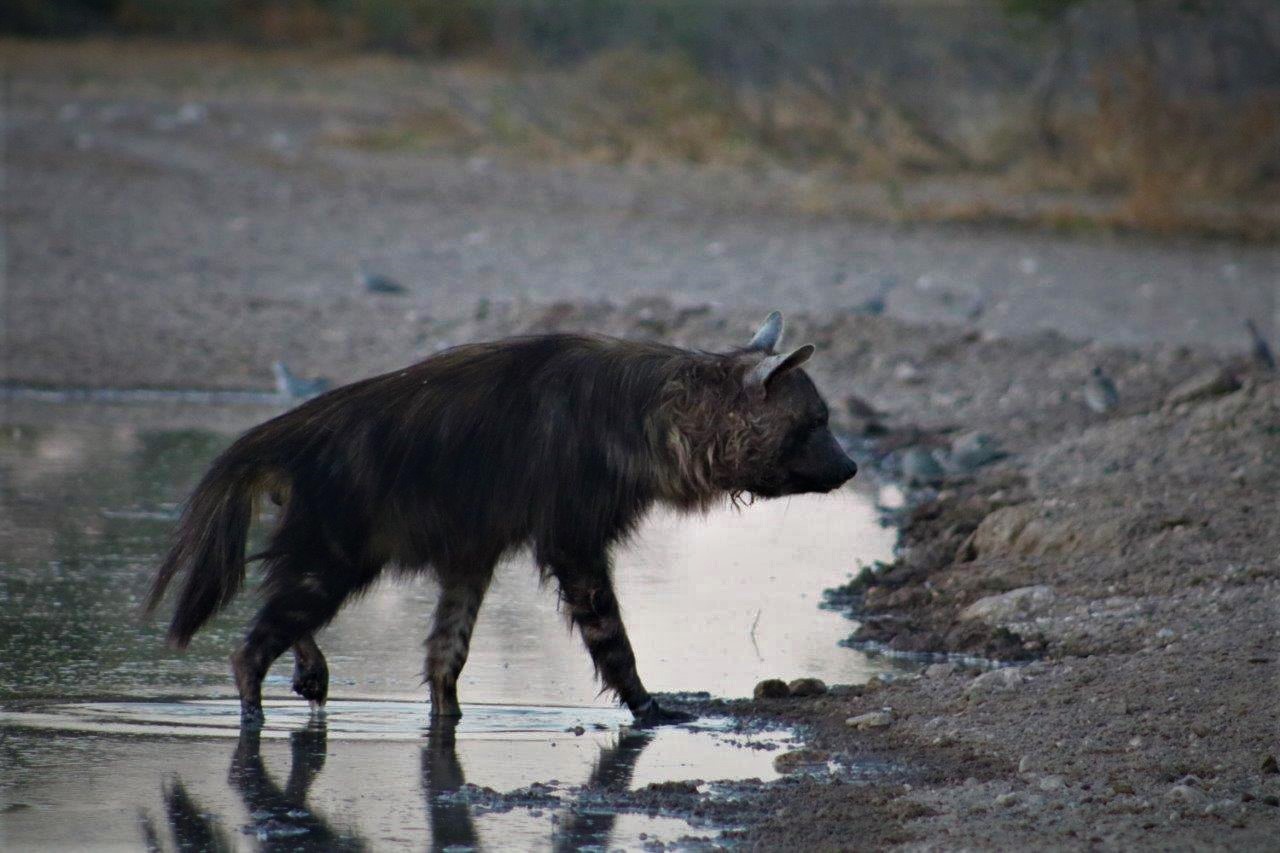 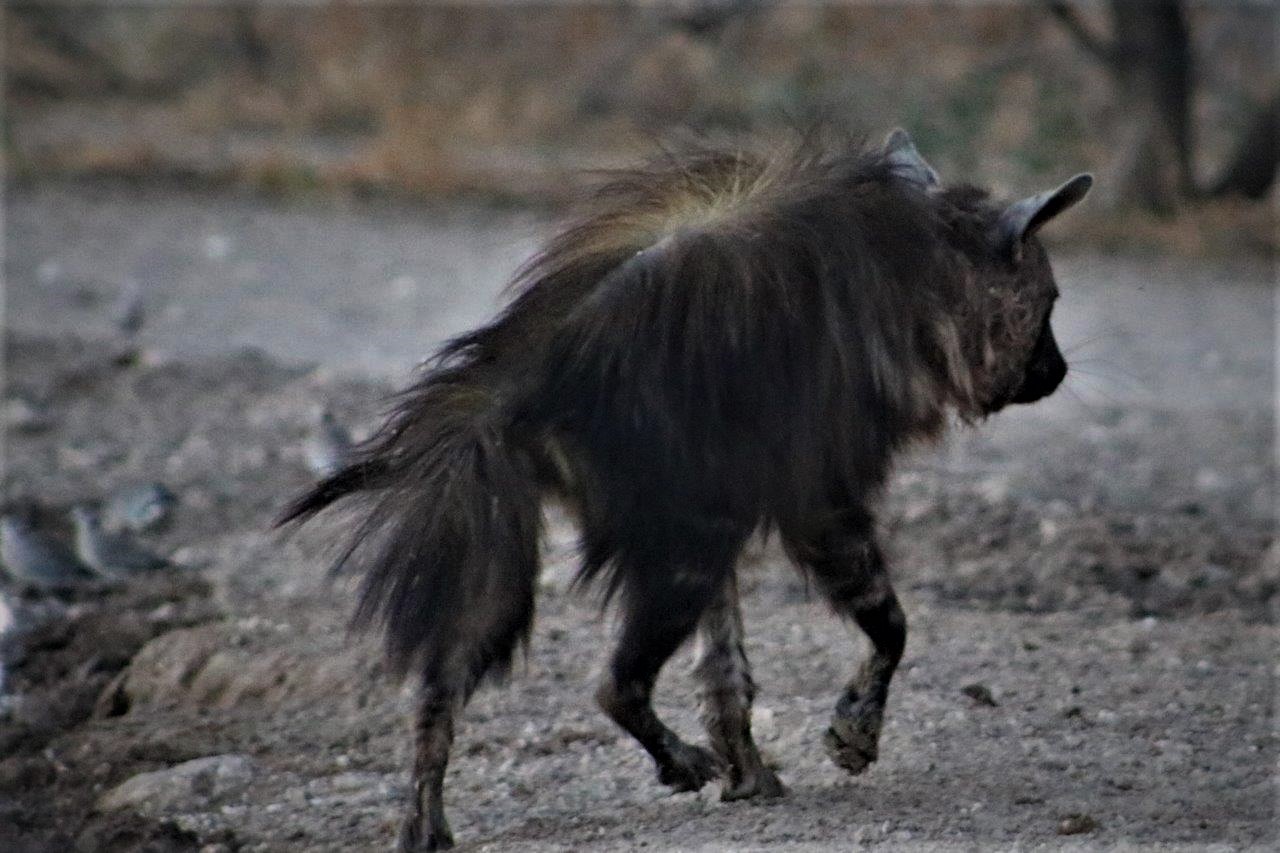 We’ve seen cheetah tracks on occasion at hide waterhole, and Blue and conservancy crew have had one sighting. Then today, near rhino pan, sitting in the open under a shepherd’s tree, there was a male cheetah. He gave us a glance or two but was much more interested in the group of oryx in the open near the old kraal. We think however he was more interested in a drink because he walked off towards rhino and we lost sight of him. 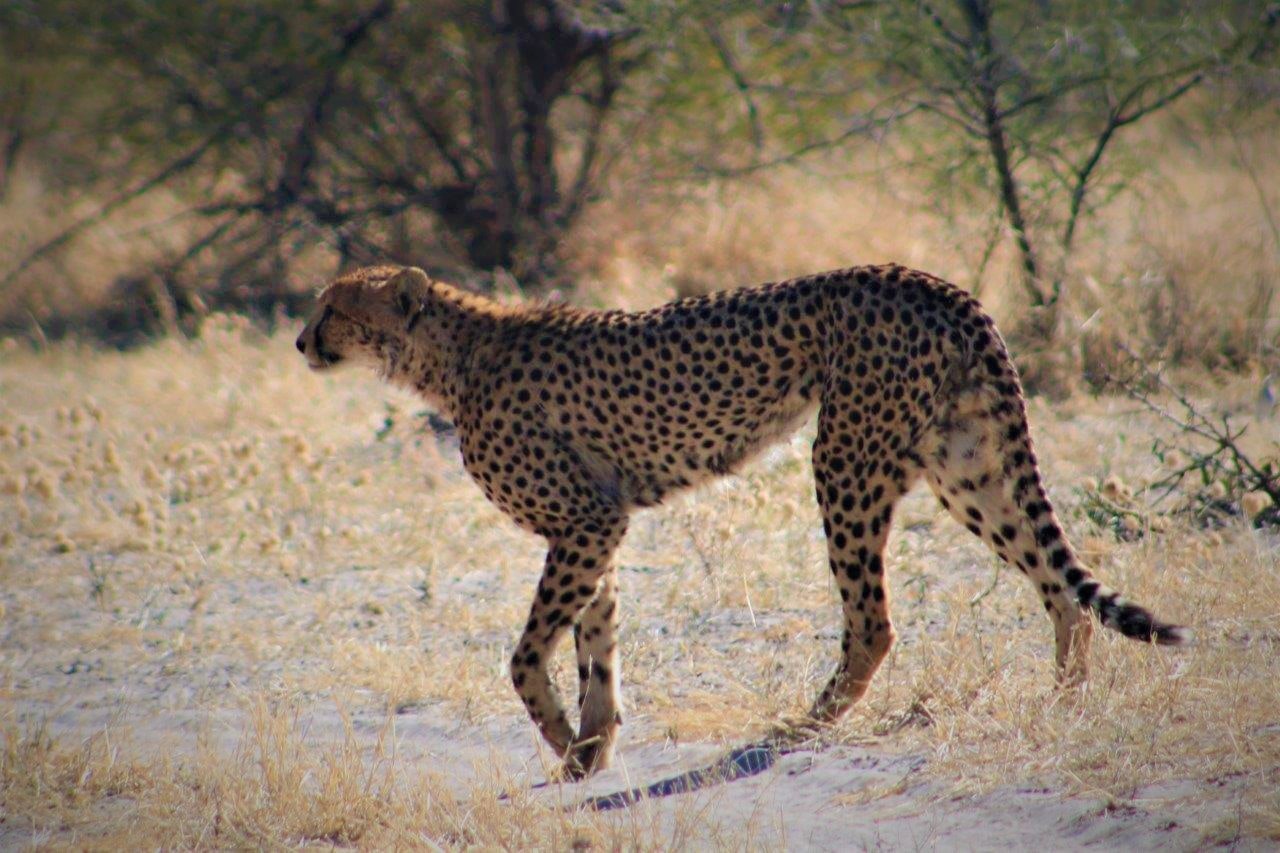 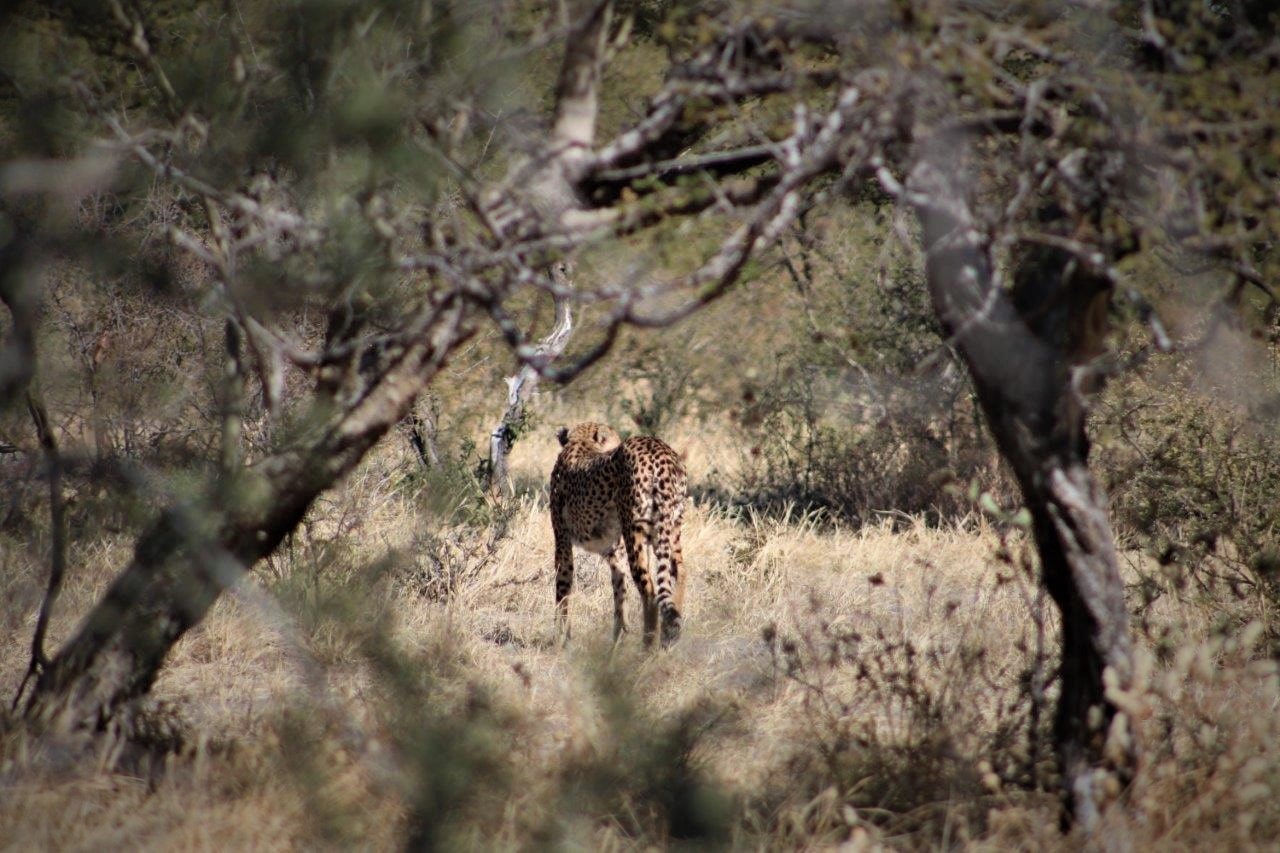 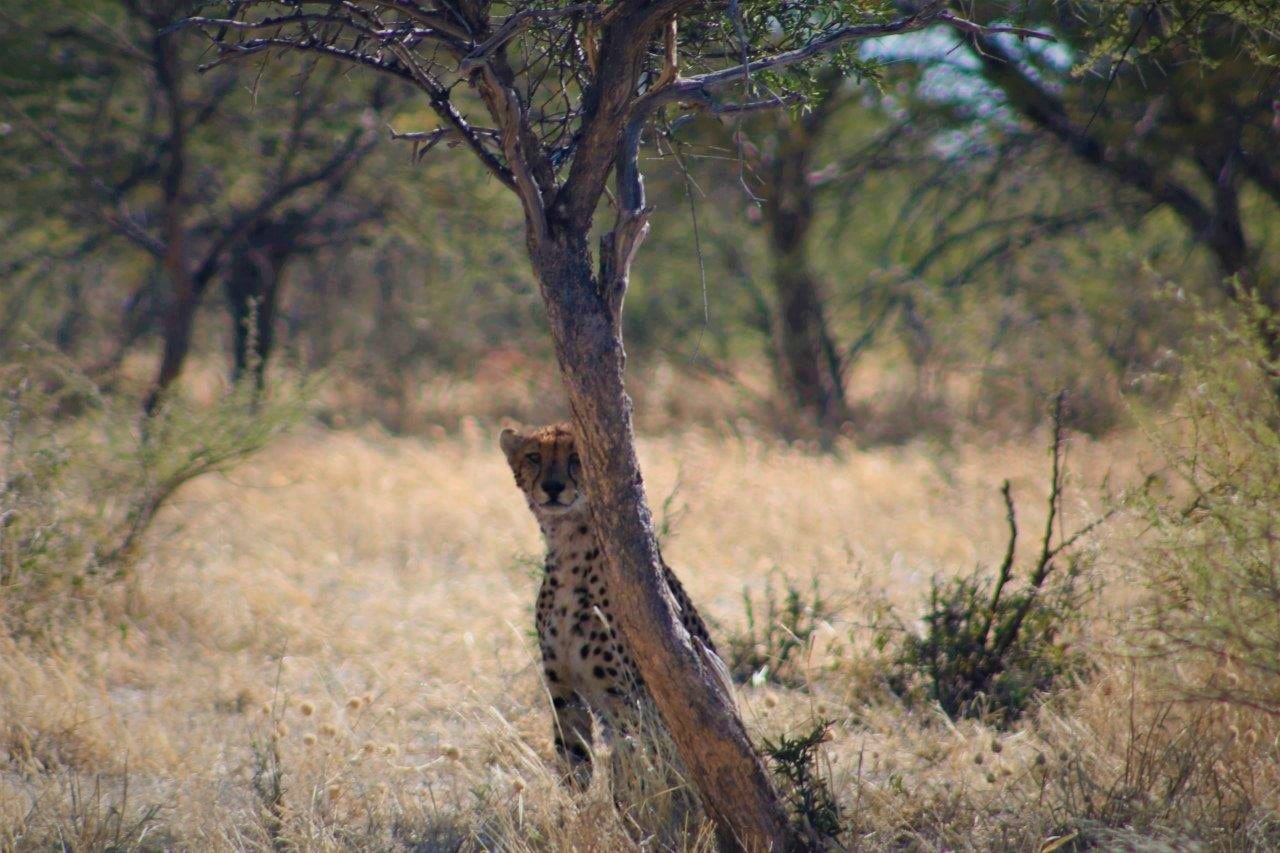 Last but not least are Dinaka’s clowns, the jackals. Every waterhole has its resident jackals, but the most entertaining are the underground photographic bunker crowd. Watching them catching quelea finches as the birds flock down to drink is to watch an exercise in agility. Then as evening draws on they curl up on the sand for the night, and won’t even look up if you drive within a couple of yards. Happiness is a good meal of quelea and then settle down for a good scratch! 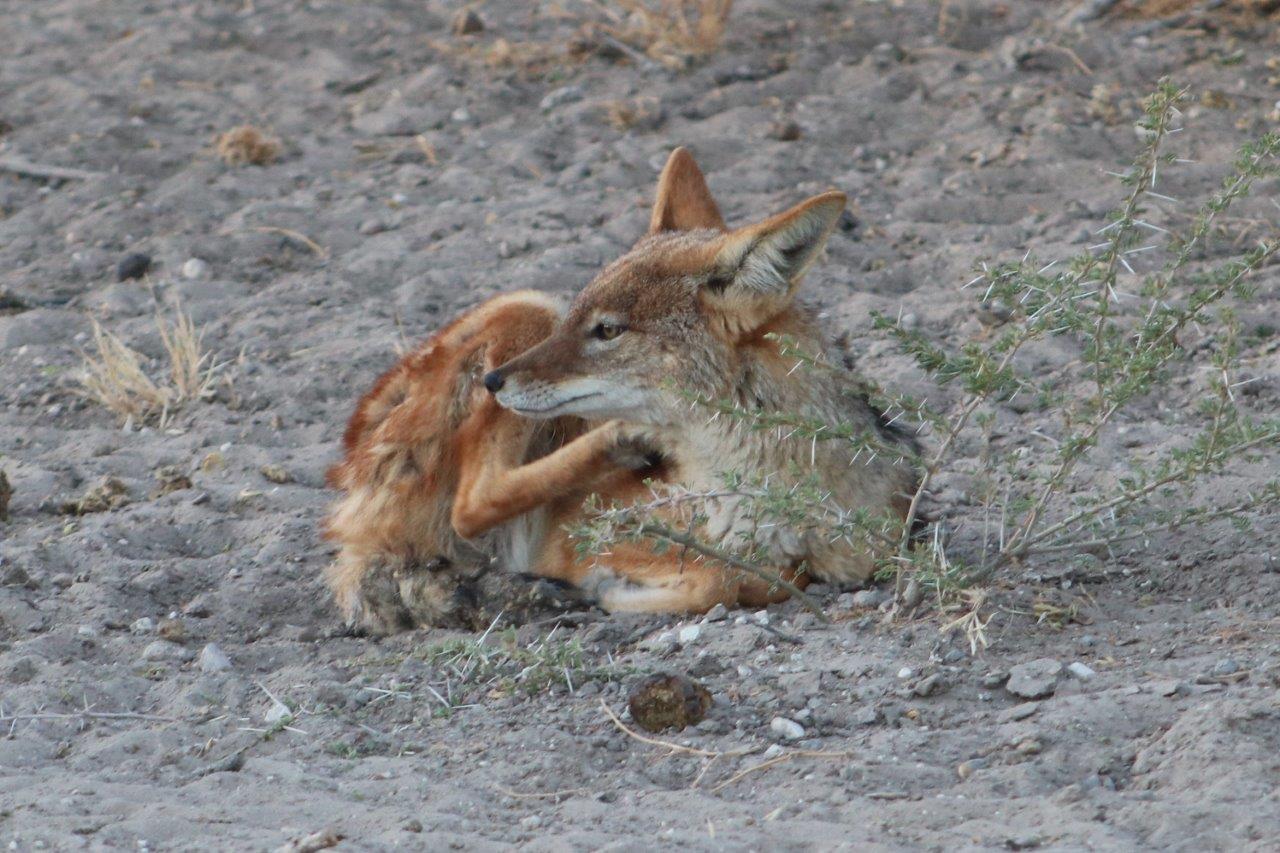 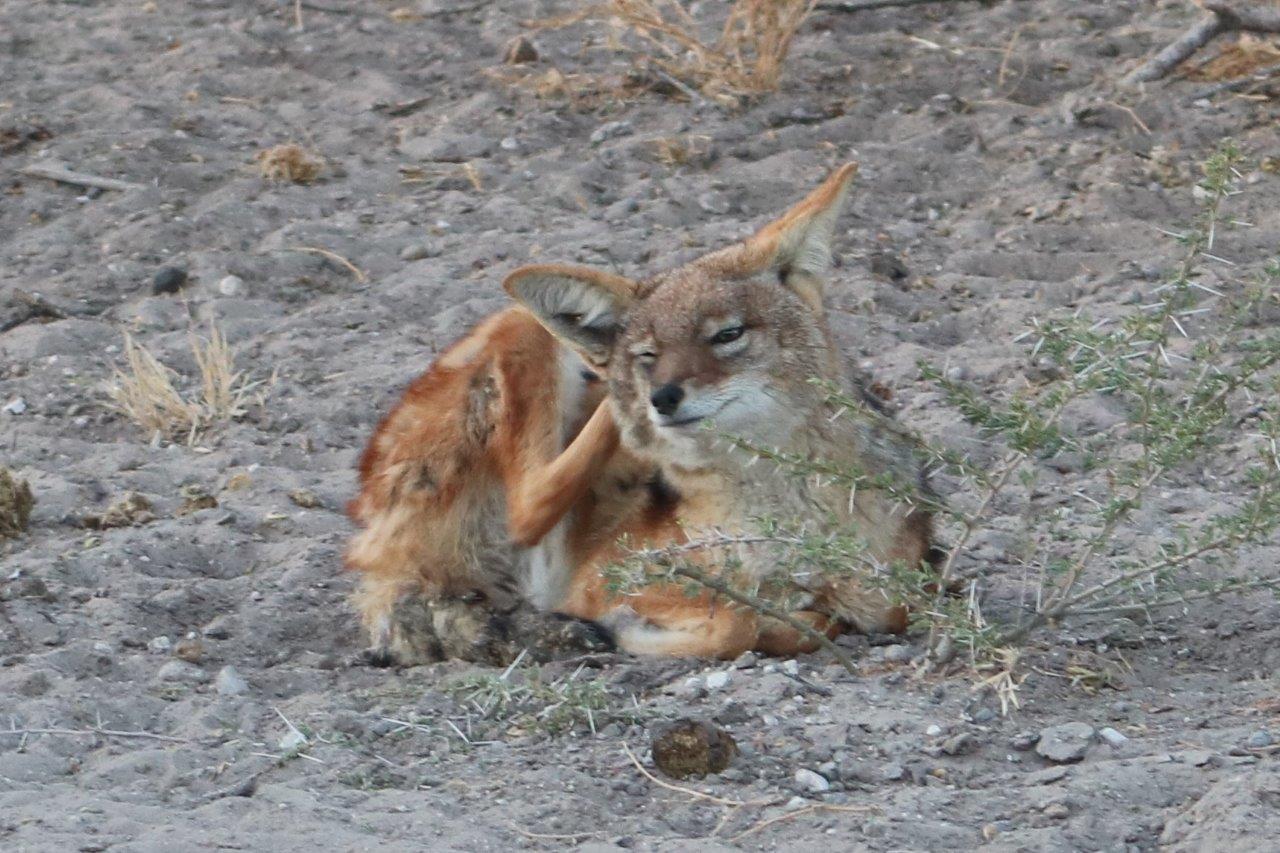 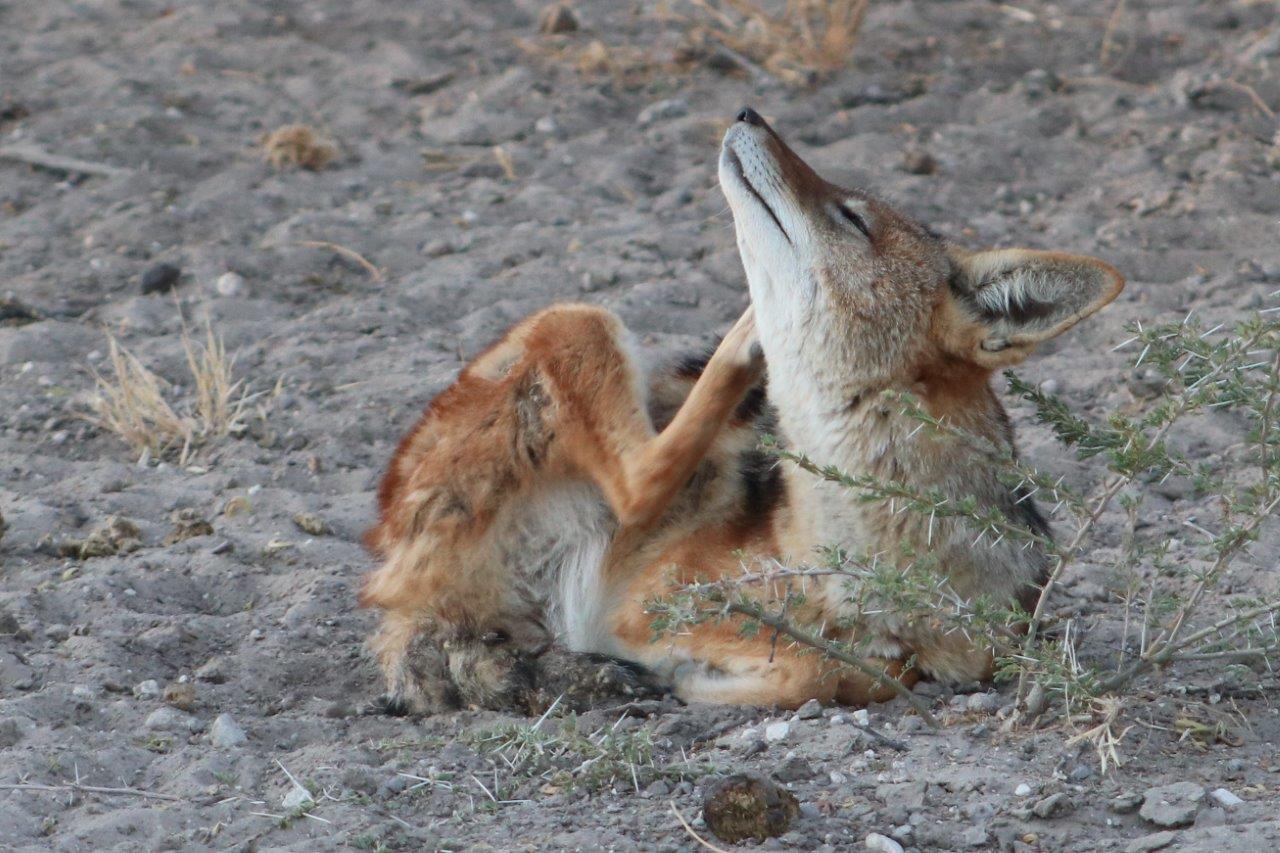 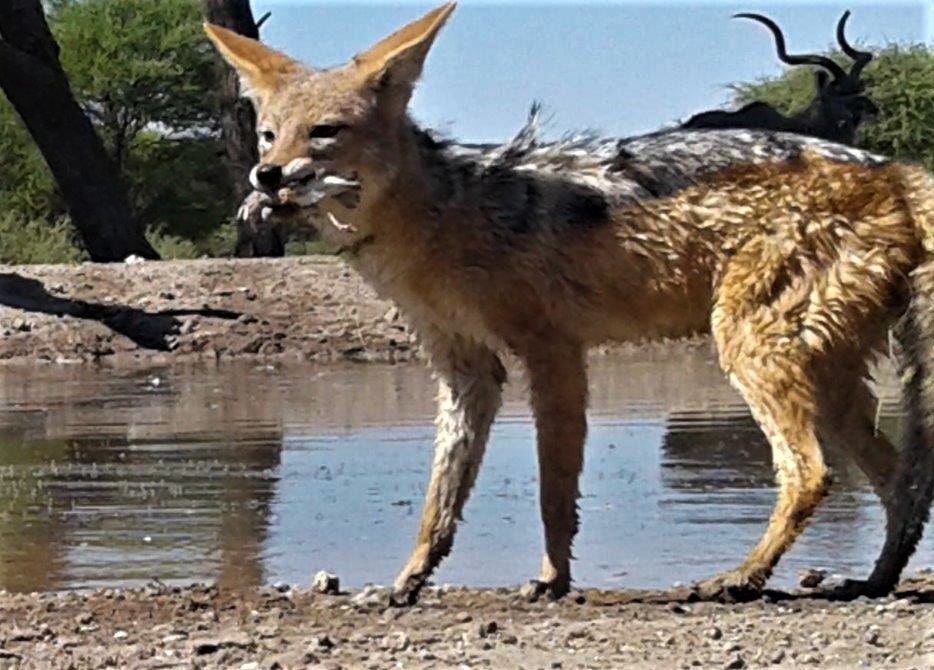